Kafka on the Shore by Haruki Murakami (2003)

Kafka on the Shore is the first work by Murakami that I have read, and I have to say, I am captivated by his uniqueness, his otherness, and his absurd sense of humour.  It’s quite rare, and very exciting, to find a book that is so unlike anything I’ve read before.
The characters who inhabit Murakami’s novel are wonderful combinations of the bizarre and the poignant.  There is Oshima, a strange, wise figure, who is neither male nor female, or perhaps both, and whose intellectual capacity extends to a deep understanding of Greek philosophy, classical music, and much in between.  His opposite is the cat-man Nakata, who refers to himself in the third person: “Nakata isn’t very bright.”  Nakata’s simple, sometimes baffled language is hugely endearing: his brother is a “depart mint chief”, his father studied “theery of fine ants.”  (It would be interesting to find out how the translator chose this way of rendering Nakata’s simple speech, how the language joke works in Japanese.)  And of course, there is Kafka, the fifteen year old runaway whose real name we never learn.
I won’t even attempt to explain the plot – suffice to say, it gets pretty trippy, especially when characters such as ‘Johnny Walker’ and ‘Colonel Sanders’ get involved.  I have a strong suspicion that Murakami isn’t for everyone, but I will definitely be reading more of his work. 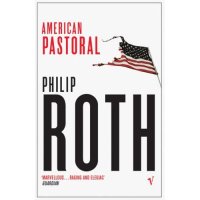 American Pastoral is one of those books that, while I can appreciate the skill of the author, I would be hard pressed to say I ‘enjoyed’.  The relentless misery of the tragedy that befalls Swede Levov (“it rhymes with ‘the love’”), the cold dissection of a good man’s life into ragged shards of flesh and bone, it all felt a bit like being beaten over the head with a big stick.  I also found it hard to understand why he uses Zuckerman and the ‘novel within a novel’ structure; is it all in Nathan’s head?  Has he filled in all the details based on nothing but his imagination?  This may be making some profound point about the nature of all fiction, but for me it makes the Swede less real, even while I was flinching at his suffering.  I know I really ought to read more by Roth, so if anyone has any suggestions of something marginally more cheerful, please let me know.
Then We Came To The End by Joshua Ferris (2007)

This book was recommended by my tutor on the writing course I took last year at City University; it was mentioned during a class on point of view, along with Bright Lights, Big City by Jay McInerney, which is next on my ‘to read’ list.  The latter is written in the second person, ‘you’, whereas Then We Came To The End is mostly written in the first person plural, from the collective point of view of the workers of an advertising company.  99% of the time, it works, creating a sense of the uniformity of the office workers’ experience.  However, if you over think it, the insights the reader is given into individual characters’ thoughts and their ability to recall dialogue word-for-word as they relate their stories to each other stretch credulity.
On the other hand, the small absurdities of Ferris’s office microcosm ring hilariously and painfully true, reminding me a little of the great film, Office Space, and, of course, The Office.  The structure is deceptively complex, reminiscent of water-cooler chat in the way it darts between past and (narrative) ‘present’, letting out trickles of information and backstory so that we build up a picture slowly, mosaically, of the cast of quirky characters that make up the office ‘family’, with all the dysfunction that word implies.  I’m not really one for laughing out loud at books, but Then We Came to the End made me smile a lot.

View all posts by Elspells