Design a site like this with WordPress.com
Get started
Skip to content
Elspells Uncategorized 15th Feb 20144th Mar 2019 2 Minutes 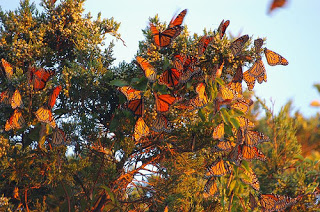 In David Attenborough’s series Life, there is an incredible section about the monarch butterflies’ annual migration to Mexico, where they hibernate for four months. In one scene, the butterflies face an unexpected frost. The forest floor is littered with ice-coated butterflies.When the butterflies finally wake up and begin to fly off, it looks like the trees are on fire, flashes of orange leaping up from the branches.

It is such a visual image, but in Kingsolver’s novel, she does an impressive job of describing it:

“The flames now appeared to lift from individual treetops in showers of orange sparks, exploding the way a pine log does in a campfire when it is poked. The sparks spiralled upward in swirls like funnel clouds. Twisters of brightness against grey sky.”

The book is partly a cautionary tale about global warming, as the monarchs mysteriously appear on an Appalachian farm, their normal patterns of migration disrupted. But it is also a fantastic character study of the protagonist, Dellarobia Turnbow, a woman stuck in small town USA poverty, but who has so much more to give.

The Husband’s Secret by Liane Moriarty (2013)

A wife finds a letter written by her husband marked ‘to be opened in the event of my death’. He is still alive – what does the wife do? As a newly married lady, the answer is obvious – OPEN IT!

This is a quietly gripping novel – I didn’t want to get as involved as I did, but it is a credit to the writer that the plot is decidedly ‘moreish’.

Um, yeah. I am not sure how this ended up on my Kindle, but in the spirit of trying new stuff I haven’t heard of, I read it. It is…okay. Fine. A family saga of Rosamund whats-her-name proportions. Not my thing. But always nice to read about people who have Agas. I’d like an Aga one day.

Even better than its prequel. Mantel really must have been Cromwell in a previous life. This is writing. Can’t wait for the final installment.

I still have a massive reading list for 2014, but am always looking for suggestions. Best reads of last year, people?

View all posts by Elspells