Skip to content
Diaries of a Dead African by Chuma Nwokolo Jr. (2003)

Given its title, I was surprised by just how funny this book is. Tracing the tales of Meme and his two sons, Calamatus and Abel, who each in succession find the previous diaries, Diaries of a Dead African is a merciless comedy, which doesn’t shy away from the problems faced by its Nigerian protagonists, but nor does it present them as mere victims. Calama’s involvement in the 419 scams is nicely nuanced, and the letters he writes are increasingly inventive and amusing – his section reminded me of another Nigerian novel, I Do Not Come To You By Chance by Adaobi Tricia Nwaubani, which deals with the same theme, and is also well worth reading.

For me, the final section was the most interesting, probably because Abel is an aspiring writer, with a bit of a chip on his shoulder: “Why won’t publishers take a chance on me? Must everybody write like Chinua Achebe? I like to write about Tortoises. That is how I am.” His (partly) unwitting involvement in politics brings yet another dimension to a book that functions on many levels, a book that (when I eventually have time for such things) I will definitely reread. Nwokolo himself is a deeply impressive man, and his website is well worth checking out: http://www.nwokolo.com/
The Night Watch by Sarah Waters (2006)

I just read a review of Waters’ latest novel, The Little Stranger (which I haven’t read yet – anyone who has, let me know what you thought of it) in which the reviewer mused “perhaps it was a mistake to lose the lesbians”. Luckily, they are out in force in The Night Watch. The 1940s setting, which is beautifully evoked, allows for an interesting exploration of the obstacles, and, arguably, increasing freedoms, encountered by lesbians, and indeed by everyone, during World War Two. I’ve decided to write about Waters for my MA essay, which I have just started doing the research for, but I won’t bore you by getting all geeky about it here.

Instead, I will just say that I found The Night Watch a refreshing change from some of the more ‘heavyweight’ stuff we’ve had to read for the course (yes, Sebald, I’m talking about you) – another reminder of the fact that what I am really looking for in a novel is a cracking story and great characters. Sue me. The reverse chronology of the novel (the three sections move backwards in time from 1947) worked for me, although it does create a lack of resolution at the end of the novel which some may find unsatisfying.
An Elegy for Easterly by Petina Gappah (2009)

This collection of short stories set in Zimbabwe manages to be scathing, cynical, compassionate and funny all at the same time. It gave me a jolt, made me realise how little thought I have given to the situation in Zimbabwe since it dropped out of the news. These thirteen stories are laced with the reality of living with political corruption, economic turmoil and an AIDS epidemic (the latter brought to the fore even by the title of the story ‘The Cracked, Pink Lips of Rosie’s Bridegroom’) but the tone is far from didactic or moralizing, and the characters are much more than mere symbols.


The spectre of death, as suggested by the collection’s title, looms as large as the ever-present hyperinflation in many of the stories, but there is also gentle humour and a quotidian normality that grounds the stories in everyday life. ‘Our Man in Geneva Wins a Million Euros’ is a lovely twist on the scams mentioned in my first review, and ‘The Negociated Settlement’ is an understated and complex depiction of a marriage that may or may not be breaking down. Gappah is a writer I will definitely be keeping an eye on; luckily she has a blog, too, so that makes things easier: http://petinagappah.blogspot.com/
GB84 by David Peace (2004)

Another MA read, and, in all honesty, another struggle to get through to the end. Peace’s novel is a week-by-week account of the Miners’ Strikes, told with such intensity that reading it becomes an almost physical act. There are two narratives running parallel to each other – I don’t know if this is the done thing, but I read the ‘main’ one through to the end and then went back and read the second, shorter, and, for me at least, more accessible, narrative. I’d be interested to know if anyone read both simultaneously, and if that added anything. Peace’s novel has been described as ‘the literary equivalent of the epic events it commemorates’ (Guardian review), and I definitely felt as if I had ‘lived through’ something on finishing the book, rather than just read a novel. I’m not sure I will be reading more of Peace’s work, though: I feel like ‘I survived’ isn’t the best reaction to have to a book.
Purple Hibiscus by Chimamanda Ngozi Adichie (2004) 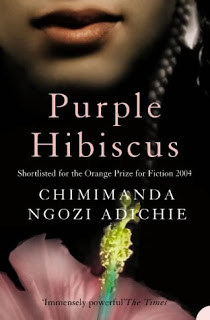 Having read Half of a Yellow Sun a while back, which was one of the best books I have read in a long time, I thought I would go back to Adichie’s first novel. It tells the story, in the first person, of fifteen year old Kambili, daughter of a wealthy and respected Nigerian businessman who is a tyrant and religious fanatic at home. This is a much quieter, more subdued novel than Half of a Yellow Sun, much more domestic in its themes, and I have to admit, I found the main character frustratingly passive. Her hero-worship of her father in particular made me side with the other characters in the novel, those who take a more critical view, such as her brother Jaja and her auntie Ifeoma, and I found myself wanting to hear them speak rather than Kambili.


Having said that, the story is extremely well-told (like Waters, Adichie plays around with the chronology, so that we are presented with four sections: ‘Palm Sunday’, ‘Before Palm Sunday’, ‘After Palm Sunday’ and ‘The Present’) and her language is just the sort of prose I enjoy, clean without being too spare, descriptive without being overwritten. Her book of short stories, The Thing Around My Neck, arrived from Amazon today – I’m looking forward to seeing what Adichie does with the short story form.